St David’s School in Purley was founded in 1912 by two sisters, Miss Mary and Miss Margery Talfourd Jones. The Talfourd Joneses were originally from Brecon in South Wales, hence the school was named after their Patron Saint. From its early beginnings with only 5 pupils, St David’s has continually adapted to a changing world, whilst retaining its own traditions and ethos.

The Misses Talfourd Jones retired in 1928 leaving Miss Bailey to steer the school through the greater part of the Second World War, including the opening of a second school in a farmhouse called Upton Wold in Gloucestershire to where some staff and children were evacuated. The two schools ran for four years and then towards the end of the war Upton Wold closed and St David’s became itself again.

A further five Head Teachers (Doris Clark, Anne Stranack, Lynne Randall, LIndsay Nash and Vincent Fox) have since left their own legacies, with Miss Clark dedicating 49 years (35 as Head!) to the school’s service. As St David’s entered its centenary year, Miss Cressida Mardell was appointed to lead the school at the beginning of a new and exciting era.

Although the school has remained on the same site for 100 years, it has evolved physically. Minor structural changes were made in 1960, when the school became a non-profit making educational trust, and the IT room was added during the early 1990s. It was not until 2003, however, that the school ceased effectively to operate from a pair of semi-detached houses. That year, major development saw the addition of a music room, a new assembly hall, a reinstated kitchen and 2 new classrooms, thus creating the building that we enjoy today. In Summer 2011, further investment enabled the full landscaping of the frontage, thereby creating a practical and welcoming approach to the school.

The year 2012 was a momentous one for St David’s as we celebrated our 100th birthday! Not content with just one celebration, we planned a full year’s worth of events, details of which can be read here.

Most recently, in 2013, the children’s playground area was redeveloped and a wealth of new play equipment was introduced to stimulate and engage the pupils; 2014 saw the redevelopment of the toilet facilities and in 2016 a new all-weather sports surface, hard court surface and pavilion were installed at the field, making the School a more pleasant environment for our current pupils, staff and parents and for future generations. 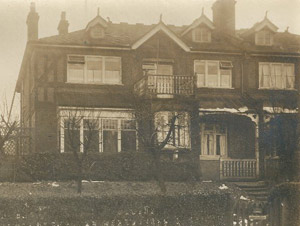 How To Find Us